States. New view of the tab for editing states

Before the states system (States) of graphic items, popups and pages allowed you to create an unlimited set of states for an item regardless of its settings. It provided freedom of editing but you couldn't see which states would work at some selected set of item settings and which one wouldn't work because of the same settings.

Now the "States" tab for editing item settings has an available set of item states. It enables turning the states on and off without deleting them. It also allows you to us the Waiting* function - the state of an item when it hasn't received data from equipment and is waiting for the data ("the command has been sent, waiting for confirmation"). The Waiting* state is disabled by default. You can activate it if necessary.

In the new States tab you can see: 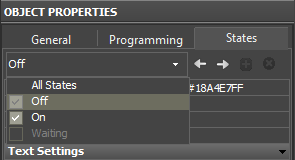 What affects the number and the set of available states?

Yes, they do. Old projects can be opened in the new editor and continue working with them.

Can I return to the old system?

During "trial period" of the new system projects can be used in earlier versions of iRidium Studio. But we recommend using the current version as a lot of project properties might cahnge and we do not guarantee their reverse compatibility.

Why this article is not helpful?