Theo Derks - NL (distributor) 10 jaar geleden in Applications / Studio (Server editor) • bijgewerkt door Oksana (expert) 7 jaar geleden • 15
Hi,
For the modbus protocol we must use an On-Press command, sending a '1' to the Modbus register, always followed by an 'On-Release-command', sending a '0'.
The questions: can you improve the Modbus protocol, so this will be done in the default On-Press command? So the On-Press command is sending the 1, followed by the 0? Or make a special command (only if the installer is using a Modbus protocol), with this function build-in? Because now, for every button that will be used in a project, the installer has to made 2 commands, and that's not logical, so it's better to build-in this in the protocol for Modbus.
This should be a great improvement for all Modbus users!
Thanks
Theo
Stem

0
Matthijs Dankelman 8 jaar geleden
Like it but not for me ;-) don't use scripting with those functions.
But thanks! 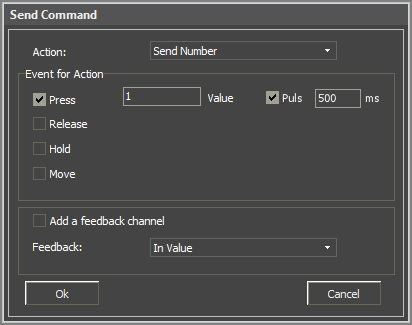 +1
Theo Derks - NL (distributor) 8 jaar geleden
Hi Kaaty, i think your idea is the most flexible we can have; for all protocols.... 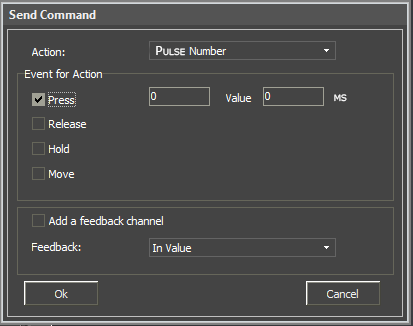 0
Ekaterina (head of support) 8 jaar geleden
yes we could implement "Send Puls" like a separated Action, it makes an interface less congested, but u have to
1. drag the command
2. choose an action
3. set value and delay.

0
Matthijs Dankelman 8 jaar geleden
Good option i think, automatic failsafe, thats how i program it now.
but now i have to put the send numbers and the delay manually, with this option it's one time.

0
Matthijs Dankelman 8 jaar geleden
Prefer the Kaaty option... think that works faster.
So my vote is for the Kaaty way ;)

+1
r riksma 8 jaar geleden
I'm not opposed to the other solution so let's go for that one then.