In your case, you need to try to update the server version manually. As an example, you can read the instructions for i3 pro here. Instead of the i3 pro package, use the i3 lite package. Let us know if you need our help in updating manually and we will highlight your request in a separate topic for the opportunity to connect to you remotely.

2. Based on the guide (https://dev.iridi.com/HDL_lite/en#Adding_HDL_Devices),I have activated the server(step 3), but how do I add the devices? I
notice Step 4 onwards is using HDL IP gateway to scan the devices. For UMC server as gateway, how to scan and add the devices?

Devices can be added either by scanner or manually. To do this, add the "HDL Interface" module to the i3 lite project and try to find everything with a scanner through it.

If you use the UMC server as an HDL gateway, then an HDL IP gateway is not required (only one device sends commands from the bus to the IP network). Here are the instructions for your question.

If your UMC is configured as an HDL gateway, you can specify it in the parameters for the scanner.

After downloading a new version of the project, the list of files is as follows: 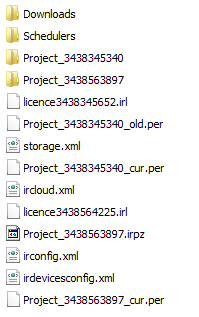 As you can see, the old files remained in place, they have values for which the "Persist" flag is set, but they are no longer used.

Attention! Do not edit these files manually! This may cause the project to fail.

If you often upload a new version of the project, then use the "Store in DB" flag instead of the "Persist"flag. The DB file remains the same.

There are two options:

1) The IT department allows access to iridi.com for individual hosts (you can create a "white" list by MAC addresses). After authorization and downloading of projects, access can be closed.

2) Log in and upload projects to servers and panels from another network, and then bring them to a network disconnected from the Internet.

Host iridi.com it is used for authorization and related processes. Storing the project and downloading it must be from the location that is specified in your personal account.

After loading the project, the server restarts to read the new configuration. During initialization, there will always be zeros in all tags. If you want to see the values in the virtual tags that were before the server restart, you can enable the "Persist" parameter for the necessary tags or enable the "Store in DB" and "Load on start" parameters. This will write the early values to the virtual tags. Until then, there will be zeros in the tags for a short time. Therefore, consider this feature if you use zeros from tags in some conditions (in JS or Routines).

For hosts iridi.com and iridiummobile.ru, the IP address 188.225.8.95 is used. If you can log in to your personal account, then look at the project storage location. It may differ.